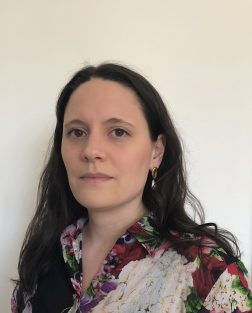 Joëlle Alice Michaud-Ouellet received her PhD from the University of Victoria in 2019. Prior to studying at UVic, where she also earned a Master’s degree, she received a B.A from Laval University in Quebec City.

Joëlle Alice’s has three areas of research specialization that inform her work as a Lecturer. The first is researching and teaching modern Western political thought, with a focus on the themes of self-determination, liberty, subjectivity, sovereignty, vulnerability, and interdependency. Her second area of expertise is studying the work of thinkers who theorize politics from a relational perspective and challenge the deep-seated belief that self-interest and self-preservation form the basis of politics. More precisely, she draws from her study of Marcel Mauss’s perspective on gifting a framework for reflecting on how culturally different communities can co-exist in peace. Her third area of expertise is the study of Indigenous/settler relations in Canada. Using Québec as a case study, her work offers a critique of settler self-determination by proposing a reinterpretation of that context in light of the responsibilities that come from being treaty partners. To carry this work, Joëlle Alice’s engages with Indigenous political thought to further her understanding of the ethos of Indigenous treaty philosophy and Indigenous perspectives on the logic of gift exchange. As settler, researching Indigenous understandings of reciprocity, responsibility, and relationship to the land allows her to critically reflect on the limits of modern Western conceptions of self-determination, liberty, subjectivity, sovereignty, vulnerability, and interdependency.